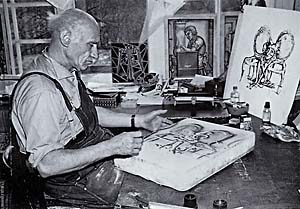 Welcome to the A. Paul Weber-Museum! The museum exhibits lithographs, drawings and oil paintings by A. Paul Weber (1893-1980). The collection was established in 1973 by the Kreis Herzogtum Lauenburg in a 17th century building, and the artist himself took part in the planning of the museum layout and the organization of the artwork.

Weber was born in Arnstadt, Thüringen. In his youth he joined the Jung-Wandervogel, a movement interested in cultivating a better lifestyle and a heightened appreciation of nature through hiking. Weber's love of his native country and his attachment to nature were awakened by hiking through Germany.

In 1928 Weber became a member of a political circle opposing Hitler and National Socialism, which was centred around Ernst Niekisch. Weber illustated books and periodicals for the Widerstands-Verlag (Resistance Press). The journals were banned and Weber was imprisoned by the Nazis from July to December 1937.

After the Second World War he continued to be a social commentator, with his criticism covering politics, justice, militarism, enviromental pollution, inhumanity, medicine and fanaticism in sports. In 1980, Weber died at the age of 87 in Schretstaken, a small village near Ratzeburg, where he had lived since 1936.

The museum presents a cross-section of Weber's work. On the ground floor are some delightful animal drawings, which Weber made especially to please children. Then come the more satirical animal drawings. Here Weber, in the traditions of Aesop's Fables, used animals to illustrate disturbing human characteristics.

The large room, from which you can see Weber's grave in the garden, shows many of his famous drawings, such as Das Gerücht (The Rumour).

The following room contains examples of work done by the artist to support his family. There are many furniture designs, book plats, sketches of coats of arms and insignia, and much commercial art.

The Britische Bilder (The British Pictures) are located in the next three rooms. Weber produced the series of over one hundred sketches and drawings to protest against Imperialism and Colonialism - in this case, British Imperialism. He wanted to show that only a small group of people benefitted from the profits of the empire while the majority of the people lived in bitter poverty. These pictures conformed to the ideas of the Widerstand circle, but were misused by National Socialist propaganda against Britain 1941.

The prisoner circle of drawings was inspired by Weber's own detention by the Nazis. The next room contains drawings from the period of the National Socialist Regime. To imagine how dangerous Weber's political involvement was, have a look at Ernst Niekisch's booklet:"Hitler-ein Deutsches Verhängnis" ("Hitler - a German Fate"), which was illustrated by the artist in 1932.

In the former kitchen of the old house stands a lithographic press. Here you can get some idea of the technique which Weber preferred.

On the upper floor landing are some examples of Weber's book illustrations. He illustrated more than 115 books, including Münchhausen and Goethe's Reineke Fuchs.

The small rooms on the upper floor show special themes that are important in A. Paul Weber's work. He was passionately concerned with depicting the destruction of our earth, seas, and even ourselves through technological expansion. His interest first manifested itself with illustrations for H. Kutzleb's book Der Zeitgenosse (The Contemporary), published in 1920. He produced Der Sterbende Hecht (The Dying Pike) in 1957 and was deeply involved in the ecological movement during the 1960's and 70's --- Death is an important theme in Weber's work, as is the figure of the fool, which is a common charakter in his drawings. The artist identified himself with his figure, which was imspired by the historical joker Eulenspiegel, who lived a few miles from Ratzeburg in the town of Mölln, and by the medieval court jester. Weber envisioned himself as a court jester, because in this position he could tell uncomfortable thruths without being punished.

The chess motif reoccurs in his work after 1937. Chess is a game, but it is also a struggle of minds. Weber used the game to make conflicts between different groups clearer. He steadily created new games between literary, political and historical figures.

Weber did not draw in an abstact manner. His critique of this type of art and his opinion of narrow-minded experts and museum visitors can be seen in the next room.

In the large room upstairs you find some oil paintings, which Weber painted in his "free time" for relaxation. He often painted members of his family and friends. Critical paintings, such as the two melancholic self-portraits, are rare.

During his 87 years, Weber produced nearly 3.000 lithographs, hundreds of wood cuts, more than 200 oil paintings and several thousands of other drawings.